It’s been 13 years since James McFadden set foot on the Arunga Park Speedway track in his former hometown of Alice Springs, but it was a triumphant return in last Thursday night’s $20,000 Dance in the Desert for 410 Sprintcars.

Since competing at Arunga Park Speedway for the first time as a fresh-faced 16-year-old rookie back in 2005, the 29-year-old racer, who these days lives in the Victorian coastal town of Warrnambool, has enjoyed what can only be described as an illustrious career, building up a wealth of experience which the two-time Australian Champion used to claim the Dance in the Desert spoils that paid $3000.

Qualifying on pole position for the feature race, after winning two of his three heat races and placing second in the other, alongside fellow Victorian Jack Lee, who was driving the Vic # 20 car owned by McFadden’s dad Dave, McFadden was unstoppable from the outset of the feature race, getting the jump on Lee at the drop of the green flag and immediately taking control of the lead around the 402-metre track.

From there, the current and four-time World Series Champion was a model of consistency throughout each of the 20 laps, outpacing his rivals and greeting the chequered flag in first place by a comfortable margin. Despite a brief battle with current NT Champion and Darwin’s Chace Karpenko on the opening lap, Lee managed to hold his position, coming home in a strong second ahead of Karpenko in third.

While he was able to steal one position from Scott Reilly in the early stages, reigning Dance in the Desert Champion Mitchell Wormall was disappointed to miss out on a successful defence, finishing just off the podium in fourth, while fellow Western Australian Reilly rounded out the top-five finishers. 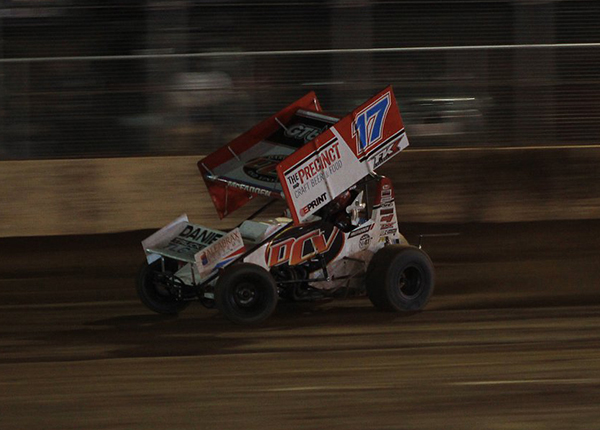 Andrew Thompson (Vic) was the next driver to greet the chequered flag, who stole sixth place from Darwin’s Jamie O’Neill in the early stages, followed by O’Neill, who was forced to endure advances from teenage rookie Kale Quinlan, also from Darwin, in the middle stages of the feature race but managed to fend Quinlan off to place seventh. Improving on his starting position by one place, Quinlan came home in eighth, followed by local Shane Cole, who was the final finisher in ninth

While each of the nine feature-race starters were able to finish, three drivers were unable to take their places in the feature-race line up, including the Darwin-based Goldoni brothers, Daniel and Jarrod, who both suffered from mechanical issues which had continued to hinder them throughout the night, along with local Lenny Cole (Shane’s brother) who also encountered dramas that brought his night to a premature end.

In addition to McFadden’s pair of heat-race wins, other heat-race victories went the way of Lee (x 2), Karpenko and Reilly.

Arunga Park Speedway would like the following sponsors for their values support of the 2018 Dance in the Desert: Motorsports NT, A One Mechanics, Sprint Mufflers & Exhausts, and Dave’s Used Cars.