Sprintcars Primed for Dance in the Desert

Commencing what is set to be a massive weekend of motorsport in the Northern Territory, this Thursday night will see the Arunga Park Speedway track light up for the second annual Dance in the Desert event, with home-town hero James McFadden leading a hot field of 410 Sprintcars into battle.

Off the back of a clean sweep of the four-round Chariots of Thunder Series at Darwin’s Northline Speedway over the past fortnight, McFadden, who is a two-time Australian Champion, heads into this event, which is part of the annual Red Centre Nats, as the hot favourite. 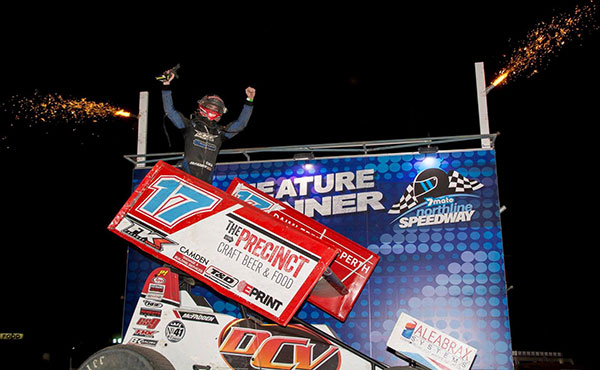 With the Dance in the Desert representing somewhat of a homecoming for him, the current and four-time World Series Champion is no doubt aiming to come away with the victory to complete his recent Top End domination; however, having only competed at the 402-metre track once, which was as a Sprintcar rookie, well over a decade ago, the 29-year-old racer certainly won’t have it all his own way.

Aiming to take the challenge up to the now Warrnambool, Victoria-based McFadden is a list of NT-based racers, including local racer Lenny Cole, who will be out to prove himself and capitalise on his home-track advantage.

Darwin’s Chace Karpenko in the lead-up to the Dance in the Desert has enjoyed an impressive 2018 season, which included claiming victory in the recent NT Title, and this no doubt makes him McFadden’s main threat. Fellow Darwin-based racers in the Goldoni brothers Daniel and Jarrod, Jamie O’Neill and young rookie Kale Quinlan are also amongst the nominations.

The winner of last season’s inaugural running of the Dance in the Desert, Mitchell Wormall, from Perth in Western Australia, returns to the Alice Springs venue to defend his champion mantle and joining him in the field is fellow Western Australian Scott Reilly, while South Australian hard charger Ryan Jones shapes up as a front-running contender.

Leading the charge for the Victorian contingent is last season’s Northern Territory Champion Tim Van Ginneken. After a tough run throughout the Chariots of Thunder Series over the last two weekends, Van Ginneken is aiming to return to the pointy end of the field. He will be joined by fellow Victorians Jack Lee and Andrew Thompson.

Rounding out the field is lone Queensland representative Andrew Corbet, who endured a mixed run throughout the Chariots of Thunder but is aiming for a consistent showing come Thursday night.

The $20,000 Dance in the Desert event consists of three heat races and a 30-lap feature race. Participating drivers are being offered $500 each in tow money and considerable potential winnings, including $3,000 to the feature-race winner.

Thursday night’s action will commence with practice from 5pm and racing getting underway at 7pm.

Gate prices are as follows: family $50, adults $20, kids and pensioners $10, and kids 12 and under FREE. Tickets for Red Centre Nats pass holders are half price.

Full bar and canteen facilities are available; however, please note that glass is not permitted inside the gates.

The Arunga Park Speedway track is located at 11 Herbert Heritage Drive in Stuart.

Arunga Park Speedway would like their 2018 Dance in the Desert sponsors: Motorsports NT, A One Mechanics, Sprint Mufflers & Exhausts, and Dave’s Used Cars.