A number of drivers from six different divisions converged on Alice Springs’ Arunga Park Speedway recently, where they battled it out for top honours in the 2018 Centralian Titles in their respective classes.

Offering close and exciting racing across each of the classes, the Centralian Titles were once again a popularly attended event on the season schedule and were a huge success among spectators and drivers alike.

While Joe Orr made a return to the track with a new engine in his arsenal, it was Jared Woolcock who proved unstoppable in the Formula 500s feature race, greeting the chequered flag in first place ahead of Patrick Geraghty and Paul Totan, who drove composed races to complete the podium finishers.

In the Wingless Sprints, veteran racer Richard ‘Dicko’ Hawkins had his sights set on the chequered flag, taking top honours ahead of fast-paced newcomer Trae Cole and Wayne Tregea.

Fresh off the back of contesting the National Street Stock Title at Adelaide Motorsport Park, Eric Donaldson came away with the feature-race victory, with ex-bomber driver Adam Quinn proved his versatility to come home in the runner-up spot. Tennant Creek’s Jayden Geisendanner was also in strong form, rounding out the top three.

Always a crowd favourite, the Bombers proved that they have what it takes to produce action-packed racing, with Jason Barker claiming what was a narrow victory from Simon Nicols, while Luke Richardson clinched third place aboard the ‘green machine’. 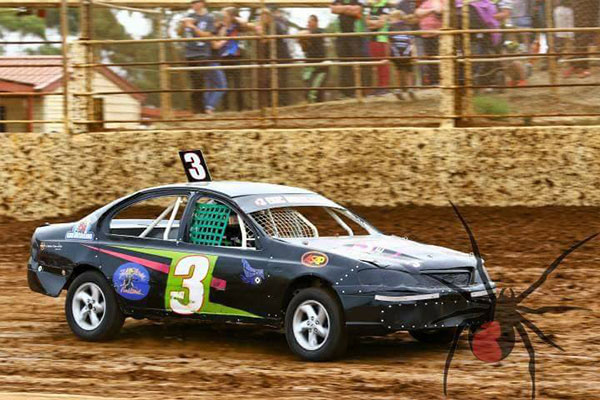 It was the best of the Yamahas in Senior Quads, with Rod Calvert coming out on top in the feature race, while Warren Thompson and Sharali Mahomet also found themselves on the podium, finishing in second and third place respectively.

The Junior Sedan All Stars delivered some brilliant racing, with Karl White, Shane Greening and Lachie Spilsbury completing the top-three finishers. It was a disappointing end to the night for Jet Thompson, who had been leading the feature race, only to spin out on the fifth lap, putting him out of contention for the win.

Sanders brothers, Mitchell and Ryan, had plenty of reason to celebrate after scoring a double podium in the Junior Sedan Rising Stars. The pair flanked Lang Hayes, who came home in the runner-up spot.

With this Saturday night’s Memorial Night being washed out, the next hit out for Arunga Park Speedway will be on the Saturday night of March 24 with the running of the Wild Wayne 20/20, which will feature Bombers and Wingless Sprints.