Rain Holds Out for Presidents Cup

After a week’s worth of inclement weather and an abundance of water on the track, Alice Springs’ Arunga Park Speedway was extremely pleased to be able to get last Saturday night’s racing underway with the annual Presidents Cup.

Headlining the event were Speedcars, with the schedule also featuring a number of other support classes, including Street Stocks, Wingless Sprints, Junior Sedans, Bombers and Quads.

In what was a small but entertaining field of Speedcars, it was Cameron Robertson who clinched the Presidents Cup, after going unchallenged in the feature race, due to his rivals experiencing continued mechanical and engine issues throughout the earlier heat races.

It was a night to forget for Garth Thompson, whose Presidents Cup assault began in the worst fashion, with the Arunga Park Speedway President being unable to contest the opening two heats due to engine woes. Solving his engine dramas in time for the third heat, Thompson managed to claim the win, before the issues resurfaced, bringing his night to a premature end. Cameron’s dad Twig Robertson was also unable to start the feature race due to mechanical issues, ultimately gifting the overall victory to his son. 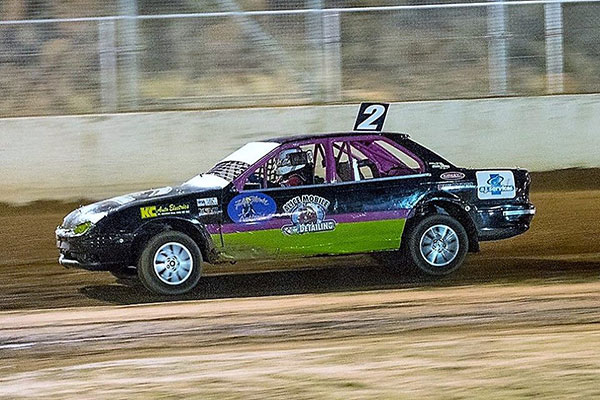 Going up against the largest class of the night, Rod Berry showed his experience by overcoming adversity in the action-packed Street Stocks feature race, claiming the chequered flag after losing a side panel in the early stages.

Having made a return to the track in the 2017-18 season, Richard ‘Dicko’ Hawkins was victorious in the Wingless Sprint feature race, crossing the finish line ahead of Wayne Tregea. Mike Thompson was the only casualty, being forced to end his night prior to the feature race due to engine dramas.

Returning to the Alice Springs track after contesting their NT Title a fortnight prior, the Junior Sedan All Stars drivers each had added experience under their belts; however, it was Karl White who managed to dominate the feature race to claim the win.

In the Junior Sedan Rising Stars class, which is designed to give young drivers the experience and knowledge they need in order to later move into the All Stars class, it was Mitchell Sanders who out-drove his fellow competitors in the feature race, scoring the win ahead of his younger brother Ryan, Lang Hayes, Logan Foley and Maddie Vale.

After a somewhat slow start to the season, the Bomber class was out in force on Saturday night, with Simon Nicol, Luke Richardson, David Parkyn, Jason Barker and returning driver Ben Marsh amongst the ranks.

Off the back of a winning streak in the 2016-17 season, Barker proved that he hasn’t lost anything over the off season, taking out the Presidents Cup.

Warren Thompson was the best in the Senior Quads, scoring the victory aboard his Yamaha YFZ450, while Junior Quads saw Jaka Harris and Riley Thompson on two wheels, and Oscar Roberts and Lincoln Meekings on four, with the youngsters displaying their skills on both the race track and the infield track.

For their next event, Arunga Park Speedway will host the hotly-contested and hard-hitting Outback Vehicle Recovery Demolition Derby Christmas Show on the Saturday night of December 2. The nomination form for this event can be downloaded via their website, Facebook group or picked up in person from Alice Springs Metal Recyclers on Ghan Road.