Arunga Park’s History-Tinged Wall to be Hammered into Oblivion

Arunga Park Speedway has been in its current location on Herbert Heritage Drive since the 1960s, with the official opening of the old wall on April 23, 1973.

After the recent rain, the current season was cancelled due to the wall’s deterioration.

The NT Government announced a grant of $1.85 million for much-needed upgrades – including a new retaining wall – last year.

Initial plans were for the new wall to be constructed inside the existing wall, but after further developments, it was decided that the old wall was to be removed completely.

The committee, led by president Garth Thompson, saw an opportunity to bring the old and new together.

Saturday night will not just be a time for reminiscing.

Volunteers have been working tirelessly to ensure the night has something for everyone.

“We want the whole family involved. Kids can bring out their pushbikes, because at 6.30pm there will be a BMX race,” Thompson said.

“There will be face painting, lucky dips, a colouring competition for the kids, with fantastic prizes donated by Sprint Car Champion and ex Alice Springs resident James McFadden, plus many more activities still to be finalised.

“We even have an original member flying in from Queensland just for the night.” 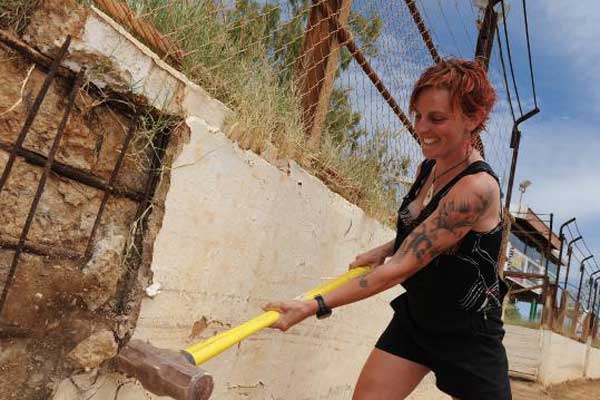 As well as fun for the youngsters, there will be plenty for the young at heart, with numerous displays, including a car that actually raced before the wall was built.

Moe McCosker will be bringing out an early 1970s Jap motorbike, that he raced in 1974. Phil Anderson and Kelvin Willis, will also be bringing their bikes out and Chris Holder’s World Title Bike will also be on display.

Colin Butler has restored a Vintage Sprint Car which will be out there as well.

There will also be the first trophy awarded to Robbie Armstead in 1978 for “Punching a Hole in the Wall” on display.

Along with numerous historical vehicles, there will be many current race cars and bikes.

“The gates to the track will be open from noon for anyone wanting to set up their displays and anyone and everyone is invited to participate,” Thompson said.

“If people have a race car or bike they want to sell, they are encouraged to bring it out.

“Also if anyone has old photos, videos or even trophies, please bring them out to share.”

The Alice Springs Go Kart Club was formed 30 years ago by members of the speedway and used to race on the infield. Fittingly, they will also have a display.

The wall has been marked out into 150 sections. Anyone can “buy” one of these sections for $20. The idea is to bring your spray cans and decorate it as you please.

For $5 you can also have your turn on a sledgehammer for five hits of the wall.